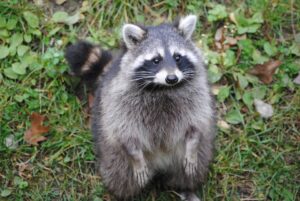 Raccoons can carry rabies and can act aggressively when sick. They can bite and potentially infect humans and pets. One of the primary symptoms of rabies is unusual behavior. Since raccoons are primarily nocturnal, many people assume that a raccoon they see during the day must be infected with rabies. However, this is not necessarily true.

Reasons Why a Raccoon Might Be out During the Day

If a raccoon is out during the day, that is not a clear sign that it has rabies. There could be other perfectly logical reasons why it is out. For example, it could be looking for food. Nursing mothers especially need extra food to produce enough milk to feed their young, so they may need to go out frequently to forage.

Raccoons are often opportunistic when it comes to choosing food sources. One place where they often look for food is in garbage cans. If they learn that homeowners put out trash cans in the afternoon and that they are usually full of tasty table scraps, raccoons may come out during the day to dig through the trash before it is collected.

A raccoon could also be out during the day looking for a new home. It is possible that the raccoon’s previous den has become unsafe because of a predator, or perhaps it was living in an attic and the homeowner sealed off the entry point. In that case, it may have no choice but to look for a new place to live during the day.

If you see a raccoon out during the day, you should observe it but should not approach it. If it looks sick or lethargic, is walking erratically or falling over, or appears paralyzed, it probably has rabies. In that case, you should call your local animal control department. However, if the raccoon is behaving normally and simply appears to be looking for food, it is most likely not infected with rabies. Just leave it alone.

What to Do If a Raccoon Is Living in Your Attic

Raccoons often create dens in places like attics that offer shelter from rain and snow and warmth in the winter. They can cause damage when they chew and claw their way in and can leave waste behind. If a raccoon is living in your attic, you should have it removed before it causes major damage to your home.

Anderson Wildlife Control can humanely trap and relocate the raccoon. We use safe and environmentally friendly methods to ensure that no animals are harmed in the process. We can also find and seal off the entry point that the raccoon used to get in to prevent it and others from getting into your house in the future. Contact us today for an estimate.

How to Remove Raccoons From Your Property Humanely
November 18, 2020

Keeping Raccoons Out of Your Connecticut Home
January 21, 2020