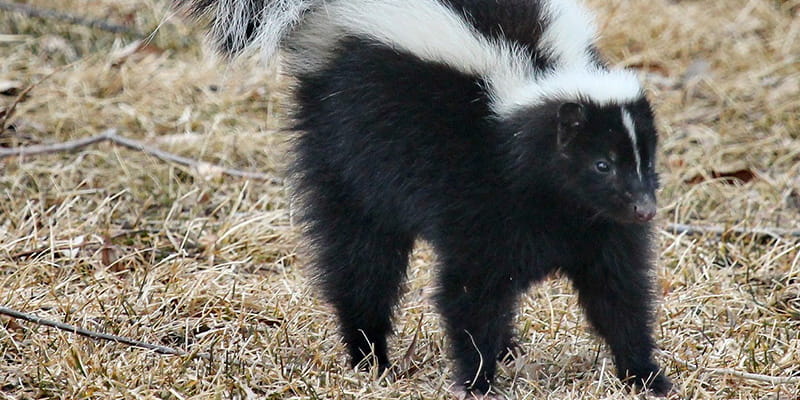 Skunks can be found across most of North America. They belong to four species with members active in different areas. Skunks are famous for the smelly spray that they use to defend themselves if they feel that they or their offspring are threatened.

Some Things You May Not Know about Skunks

Skunks typically live in a den located near a water source. The den may consist of a hollow tree or log, a pile of brush, or a burrow that another animal abandoned. Skunks may also dig burrows and may even squeeze through cracks in building foundations to seek shelter. They generally don’t venture far from their den.

Since skunks are nocturnal, they’re typically only seen at night. They spend most of their time alone, except when mating, raising young, and gathering to stay warm in the winter. Skunks are less active during cold weather.

Skunks are omnivores that eat a wide variety of foods, such as insects, rodents, frogs, bird eggs, and plants. They often dig to search for food and may leave behind holes in a yard or garden. Those holes can affect a property’s appearance and can also create a safety hazard.

Skunks’ diets depend on the season and what is available. They seek food sources from humans when given an opportunity. If you leave trash out overnight, for example, skunks may knock over cans and dig through them searching for something to eat.

Although skunks generally keep to themselves, they can pose a risk to humans and pets. In addition to their foul-smelling spray, skunks can carry and transmit serious illnesses, including rabies, as well as viruses and parasites, to people and other animals.

How to Get Rid of Skunks

Don’t approach a skunk. It may spray you if it feels threatened. The odor is very unpleasant and can be difficult to remove from your skin, hair, and clothing.

You shouldn’t try to trap and relocate a skunk. If you don’t know how to do it, you may be unsuccessful. You may get also sprayed, scratched, or bitten and may contract an illness.

The professionals at Anderson Wildlife Control have been handling skunks and other types of animals since 1993. We have helped homeowners and businesspeople all over Connecticut deal with wildlife problems using safe and humane methods. We can trap and relocate a skunk while taking precautions to avoid harming it. We can also identify the skunk’s den and install a screen to keep it from returning and to keep other animals out.

Evicting a skunk can prevent it from causing further damage to your property or endangering the health and safety of your family and pets. Contact Anderson Wildlife Control today to get help dealing with your skunk problem.